Daily Devotion for Thursday, May 14 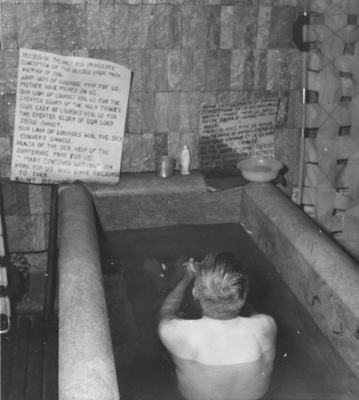 “About the Lourdes business. I am going as a pilgrim, not a patient.  I will not be taking any bath.  I am one of those people who could die for his religion easier than take a bath for it.”

Few people have been as funny about their faith – and as fierce – as O’Connor.  At first glance, we might expect that she would be quite serious.  In her early 30s she was diagnosed as having lupus, a disease of the immune system that causes the body to degenerate.  But even in her final illness she saw things around her that genuinely amused her.

She was not amused when an elderly cousin insisted she travel to Lourdes to take the cure.  “Only about 40 ahead of me so the water looked pretty clean.  They pass around the water for ‘les malades’ to drink & everybody drinks out of the same cup.  As somebody said, ‘the miracle is that the place don’t bring on epidemics.’”’

She wrote her good friend Sally Fitzgerald about the trip with some dread. “It is Cousin Katie’s end-all and be-all that I get to Lourdes and if I am dead upon arrival that’s too bad but I still have to get there.”

The Fitzgerald’s, who were in Europe at the time, agreed to meet them in Milan.  O’Connor wrote them to confirm the plan. “Could you meet us in Milan?  Left for two minutes alone in foreign parts, Regina (her mother) and I would probably end up behind the Iron Curtain asking the way to Lourdes in sign language.  I cannot bear to contemplate it.”

When she told a friend that the bishop had asked her to write up her trip for a Catholic paper, she concluded: “I don’t think he has thought this through.”

We can be sure the report would have been very funny and thought to be inappropriate for devotional literature.  But it would have been Christian for it would have reveled in the great plenitude of God’s creation and the Christian comedy which we see all around us when we understand that God is the author of all things and our significance comes from God, not ourselves. That is the best news of all.

“A cheerful heart is a good medicine, but a downcast spirit dries up the bones” (Proverbs 17:22).