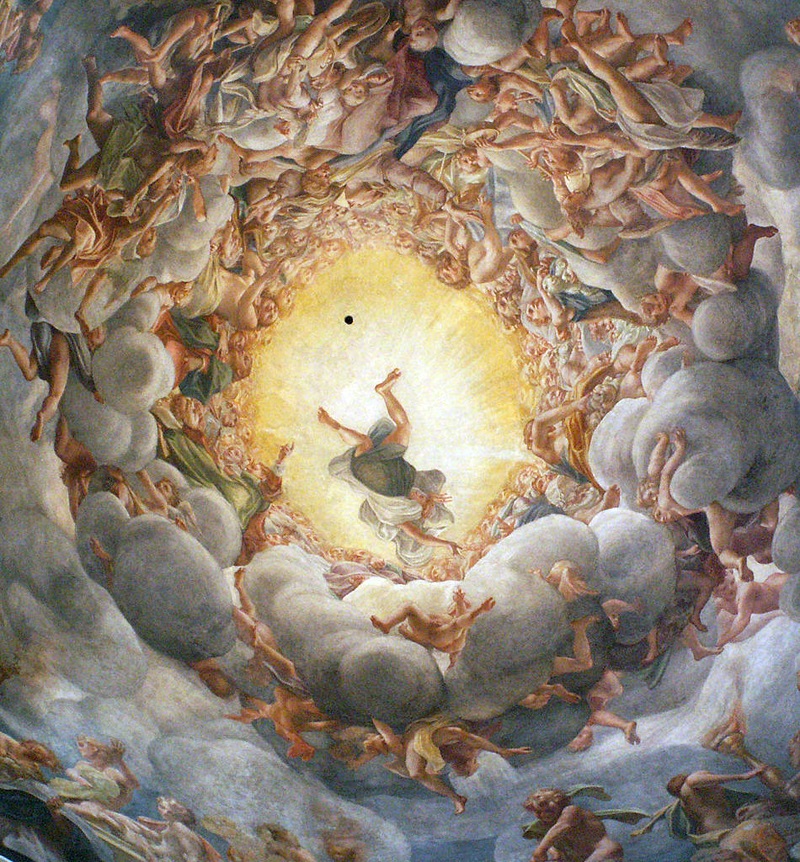 Mazzola Bedoli, Girolamo, approximately 1500-1569. Christ, Mary, Saints, and Angels in Glory, from Art in the Christian Tradition, a project of the Vanderbilt Divinity Library, Nashville, TN.

We are surrounded by a great cloud of witnesses our Reading from Hebrews tells us.  Have you ever sensed that other Christians, past and present, care about you and are cheering you on life?  If not, pray and listen to God’s Word.

This week 14 students began their first or second year of Confirmation studies in preparation for affirming the faith they entered in Baptism.  How can you and I surround them as encouraging witnesses?

The Faith of Other Israelite Heroes

29 By faith the people passed through the Red Sea as if it were dry land, but when the Egyptians attempted to do so they were drowned. 30By faith the walls of Jericho fell after they had been encircled for seven days.31By faith Rahab the prostitute did not perish with those who were disobedient, because she had received the spies in peace.

32 And what more should I say? For time would fail me to tell of Gideon, Barak, Samson, Jephthah, of David and Samuel and the prophets—33who through faith conquered kingdoms, administered justice, obtained promises, shut the mouths of lions, 34quenched raging fire, escaped the edge of the sword, won strength out of weakness, became mighty in war, put foreign armies to flight. 35Women received their dead by resurrection. Others were tortured, refusing to accept release, in order to obtain a better resurrection. 36Others suffered mocking and flogging, and even chains and imprisonment. 37They were stoned to death, they were sawn in two, they were killed by the sword; they went about in skins of sheep and goats, destitute, persecuted, tormented— 38of whom the world was not worthy. They wandered in deserts and mountains, and in caves and holes in the ground.

39 Yet all these, though they were commended for their faith, did not receive what was promised, 40since God had provided something better so that they would not, without us, be made perfect.

The Example of Jesus

12Therefore, since we are surrounded by so great a cloud of witnesses, let us also lay aside every weight and the sin that clings so closely, and let us run with perseverance the race that is set before us,2looking to Jesus the pioneer and perfecter of our faith, who for the sake of the joy that was set before him endured the cross, disregarding its shame, and has taken his seat at the right hand of the throne of God.

Jesus the Cause of Division

49 ‘I came to bring fire to the earth, and how I wish it were already kindled! 50I have a baptism with which to be baptized, and what stress I am under until it is completed! 51Do you think that I have come to bring peace to the earth? No, I tell you, but rather division! 52From now on, five in one household will be divided, three against two and two against three; 53they will be divided:father against son
and son against father,mother against daughter
and daughter against mother,mother-in-law against her daughter-in-law
and daughter-in-law against mother-in-law.’

54 He also said to the crowds, ‘When you see a cloud rising in the west, you immediately say, “It is going to rain”; and so it happens. 55And when you see the south wind blowing, you say, “There will be scorching heat”; and it happens. 56You hypocrites! You know how to interpret the appearance of earth and sky, but why do you not know how to interpret the present time?