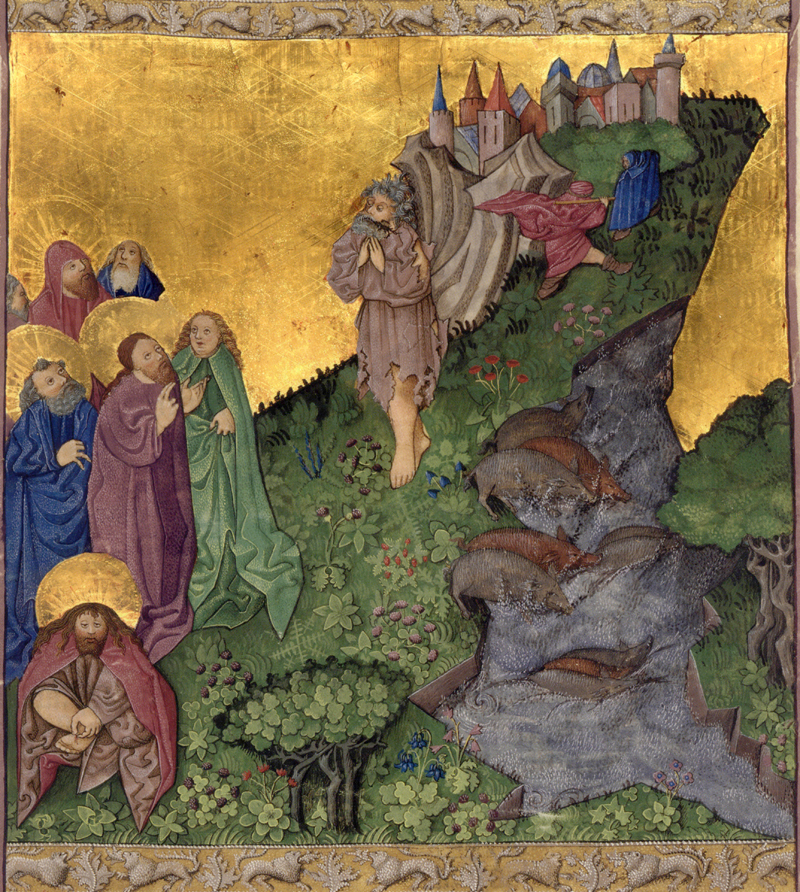 Jesus, the Gerasene, and the Unclean Spirits.

26 Then they arrived at the country of the Gerasenes, which is opposite Galilee. 27As he stepped out on land, a man of the city who had demons met him. For a long time he had worn no clothes, and he did not live in a house but in the tombs. 28When he saw Jesus, he fell down before him and shouted at the top of his voice, ‘What have you to do with me, Jesus, Son of the Most High God? I beg you, do not torment me’— 29for Jesus had commanded the unclean spirit to come out of the man. (For many times it had seized him; he was kept under guard and bound with chains and shackles, but he would break the bonds and be driven by the demon into the wilds.) 30Jesus then asked him, ‘What is your name?’ He said, ‘Legion’; for many demons had entered him. 31They begged him not to order them to go back into the abyss.

32 Now there on the hillside a large herd of swine was feeding; and the demons begged Jesus to let them enter these. So he gave them permission. 33Then the demons came out of the man and entered the swine, and the herd rushed down the steep bank into the lake and was drowned.

34 When the swineherds saw what had happened, they ran off and told it in the city and in the country. 35Then people came out to see what had happened, and when they came to Jesus, they found the man from whom the demons had gone sitting at the feet of Jesus, clothed and in his right mind. And they were afraid. 36Those who had seen it told them how the one who had been possessed by demons had been healed. 37Then all the people of the surrounding country of the Gerasenes asked Jesus to leave them; for they were seized with great fear. So he got into the boat and returned. 38The man from whom the demons had gone begged that he might be with him; but Jesus sent him away, saying, 39‘Return to your home, and declare how much God has done for you.’ So he went away, proclaiming throughout the city how much Jesus had done for him.