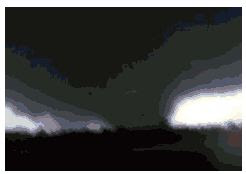 …an ordinary lazy, sunny Sunday afternoon, they say…who knew the lives of the people of Joplin would change forever in a matter of minutes on that 22nd day of May 2011.

An EF-5 tornado (winds 250 mph) touched down beginning at 5:35 p.m. —a width of nearly 1 mile wide at one point and on the ground for 6 miles, right through the heart of this city of about 50,000. It intensified as it moved across the more densely populated portion of town and lifted at 6:12 p.m. When it was all said and done, 161 casualties, 1100 injured, 8,000 homes damaged or destroyed, and $2.8 billion damage. Blocks and blocks of houses and businesses were totally flattened or just gone. How do you literally pick up the pieces…physically and emotionally.

Our Thrivent Builds with Habitat team arrived in Joplin April 29; 10 team members from 3 states: Kyle (team lead), Pat, Ron, Tom and Norm from Missouri, Cheryl from Arkansas, and Marsha, Tim, Virg, and myself from Alabama.

Our team worked on the 5th Thrivent Builds home; the 71st Habitat house to be built in the past two years.

Habitat/Immanuel Lutheran Church hosted dinner and told the story; so sad on many accounts, but SO incredibly aware they are that someone was watching out for the countless others that were alive amidst totally destroyed structures. Christine, a young mother of two and future Habitat house owner, told of her experience surviving the tornado. Looking at the pictures of devastation, it is amazing that there wasn’t even more fatalities. …I believe we all feel that we are needed here. 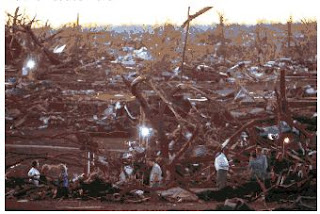 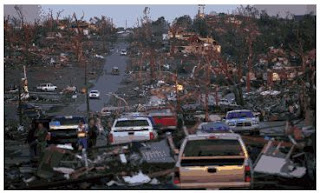 Tuesday morning we took a tour of the hardest hit neighborhoods. Almost two years later the eerie ‘emptiness’ in some areas can be felt; we cannot imagine the devastation that once was here. We can, however, feel the emotion of the people telling their stories about being in the midst of that monster as if it happened yesterday, and our hearts ache for them, knowing their lives will never be the same.

Our team arrives at the house we will work on—2424 Kentucky. The ~1200 ft structure has been built by other teams; we will be putting on the vinyl siding over the next few days. Plumbing is taking place inside the house while the team, like worker bees, jump to it outside. …no standing around now, there is much to be done!

I am anxious to test out my new pink hammer since most of the Builds I’m on do not involve hammering! Each Habitat home built here now also has an underground tornado shelter in the back yard. We had two beautiful sunny 87º days of lathering on sunscreen, and then changed to a misty, windy 47º day of putting on every layer of clothes we brought…the No. 1 words of a Build…be flexible!

As I am nailing siding on, I hear the sound of an ambulance wailing in the distance. The hair on my arms stand as I imagine how it must have sounded that fateful evening with so many emergency vehicles screaming through the blackness of night to help people. …I wonder if the residents of Joplin have that reaction every time they hear a siren.

Lunch was served in the combined ‘do good’ warehouse where Habitat builds walls and works in collaboration with several other organizations such as TransForm Joplin, Hammers & Hearts, etc., making use of each other’s services.

Our lunch speaker, a lady who was in their house during the storm, showed pictures and shared her very emotional story. She, just like the people after the Alabama tornadoes, was greatly sadden by the loss of their huge trees. I’m sure the 100-year-old trees were visually a sign of strength and stability and now without them, one would feel exposed and, it is a constant reminder of how life can change in a blink of an eye.

These Joplin people get it—their focus is not on ‘poor me’ even after all they have been through, but on their extreme gratefulness for what didn’t happen that could have, and for the outpouring of caring volunteers that came to help rebuild their lives…a BIG part in helping them heal, they say.

Yes, they did have a 17-minute warning, but like our area of Alabama, you have quite a few warnings and become complacent about seeking shelter immediately…until you’ve been through one, and then the first clap of thunder in the far-off distance makes you very nervous. It had not been even a month since the devastating tornadoes hit Alabama so we were still doing massive clean-up and healing right here when Mother Nature lashed out in Joplin!

It was graduation day at Joplin High School late afternoon. Rather last minute they decided to move the ceremony to a university about 3 miles away for more room for the 455 students and guests. The high school was destroyed; the sign was there with the O and P, someone added the H and E…

Stories were told of the unbelievable darkness and deafening quietness at night as there was no power and not much cell service since many of the towers were also destroyed. Since everything was gone—street signs and landmarks—it was hard to maneuver around a once familiar city. Cans of spray paint were found to paint the names of streets on the streets themselves. St. Mary’s Catholic Church and school were totally flattened except the huge steel cross by the entrance that was left towering over the remains. The 50-yearold cross quickly became a symbol of hope and faith for many.

Brush With Kindness
Upon waking to an inch of snow Friday, the team loaded in the van for the trip to the Crutchfield area of Tulsa, OK, to share one day in their Habitat for Humanity Brush With Kindness four-day event, an area of older homes that needed some TLC. Our team’s ‘kindness’ involved repairing wood around windows, doors, and soffits, caulking, and painting the exterior of this lady’s house. 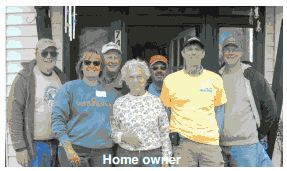 Saturday it was back to our house in Joplin—the plan was to finish the siding on the front of the house but because the weather was still not cooperating, work was done inside. The front door was installed, baffles put up, bathroom fan vent ducts secured, and areas around the electrical and plumbing in the floor and ceiling framing were sealed. 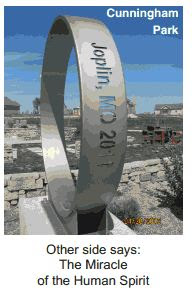 Trees that were left standing were debarked and are starting to come back with little tufts of green up and down their trunks; others that didn’t make it are now painted in bright colors. Stars with messages of hope created by volunteers can still be found throughout the city. A beautiful tribute to the human spirit, this community, and the volunteers has been designed by third year architectural students of Drury U. and built in Cunningham Park. The garden is made up of four concentric concrete rings of sidewalk that emanate from a center mosaic, a butterfly made from broken glass/china; each ring represents rescue, recovery, demolition, and rebirth. A tree has been planted in memory of each fatality, there is a tribute to all the volunteers who came to help, and a wall of ‘things collected’ from door knobs to a golf ball, signifying making something new out of pieces of things displaced. This was done in conjunction with the “Extreme Makeover: Home  Edition” with the show’s construction of seven houses on Connor Avenue.

Several butterfly tributes are created throughout the city, including this butterfly wall, depicting

…the most profound story of all…
the one retold through the children’s eyes,
.…butterflies put their wings around them
and kept them safe.
… truly there were angels in Joplin
that afternoon… 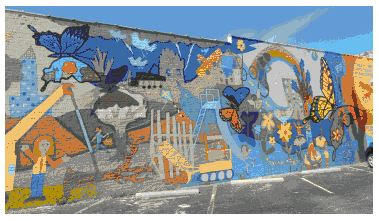