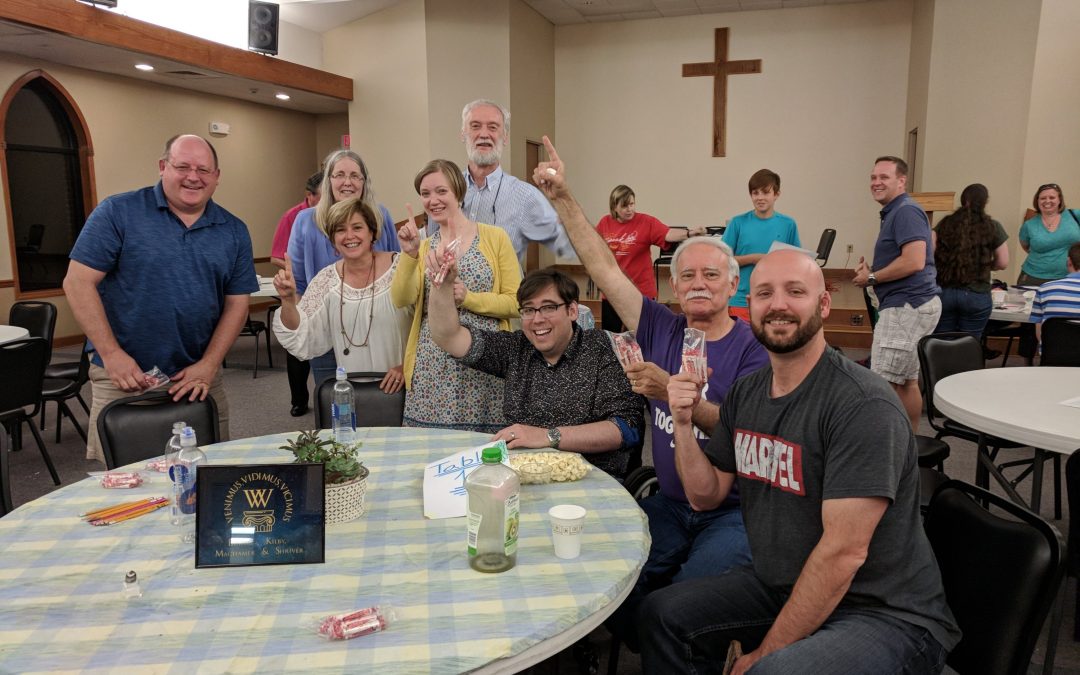 Members Match Wits and Raise Funds for the Sr. Youth’s Trip to Houston.

A fun evening was enjoyed by approximately 80 members and youth of Messiah Lutheran Church on Sunday, May 6 at the first-ever Trivia Night Fundraiser.    The event was organized by Messiah’s Sr. Youth led by Sara Galyon,  Messiah’s Director of Youth and Christian Education Ministries.   Approximately fifteen MLC youth and adults are planning on attending the  National ELCA Youth Gathering in Houston at the end of June.  $825 was raised through the sales of tables ($80 per table/$10 per person) along with the silent auction proceeds.

Prior to the event, each table/ team was challenged to come up with a team name, festively decorate their tables, and bring food they wanted to enjoy for the evening.   The Sr. Youth provided drinks and popcorn.

This year’s teams/tables were as follows:

The contest began with the announcement that all cell phones were to be safely stowed in each table’s rubber-maid boxes for the duration of the event. The teams competed in 7 trivia rounds.  Dylan Irvin and Zachary Armstrong read the clues.  Answers to the questions were written secretly on each table’s answer sheet and collected and tallied after each two round session.

In between sessions, Galyon led the group in additional games such as “Heads and Tails”  and drew door prizes. Happy Birthday was sung to both Claire Stranda and Walter Seitz.   Topics ranged from knowing presidential quotes,  geographic questions whose answers begin with “A”, and one matching round about phobias and their meaning.  The questions tested everyone’s knowledge of movies, landmarks, and celebrities.

The decidedly academic “Venimus, Vidimus, Vicimus” team narrowly led the scoring most of the evening. The team was ahead by five points into the final question, which allowed the teams to bet up to twenty points on getting the final question right.   Before it was read, Galyon announced that the final question was provided by Pastor Scott Peterson.  Each team pondered what the
“Final Jeopardy” question category would be.  Would it be fishing? Lutheran theology? MLC history? Biblical Geography?  Final point bets were placed and verified on the answer sheets.

“What was Martin Luther’s wife’s full name?”  was the final question announced by Galyon. Audible groans were uttered around the room, including at the leading table.  A quiet murmur of hushed excitement could be heard at the Sleepy Savant table in the corner, and the Fairest of Yall table in the other.  A “certain, yet uncertain” answer was written on the leading team’s answer card.

“Katarina Von Bora Luther”  was read as the answer.  The certain, yet uncertain answer proved correct. Cheers and high fives erupted at the Venimus, Vidimus, Vicimus table as they celebrated the victory.

The final results were as follows.

Huge thanks are in order to all the youth who worked so hard, parents who brought silent auction items and snacks, and the members of Messiah who came and took a chance on a new event that we hope to make at least a yearly occurrence!
I think the next time we do this, we will start a little earlier (5:30) to give people time to set up.   It would be fun to set a theme so people can decorate their tables accordingly and we can have fun contests for table decorations, costumes, themed food etc. Also, for next year we know that we can really only play about 10 tables comfortably, so if this becomes more popular, people will need to reserve their tables early!
Overall it was an awesome event and I can’t wait to do it again!