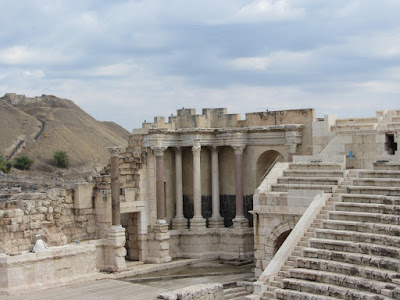 While they were there, the time came for her to deliver her child. And she gave birth to her firstborn son and wrapped him in bands of cloth, and laid him in a manger, because there was no place for them in the guest room. –Luke 2:6 -7

In 320AD Roman Emperor Constantine issued the Edict of Milan which basically served to make Christianity the religion of the Roman Empire. Shortly after that he sent his mother, Helena, to the Holy Land to find the places where the foundational events of Christianity took place. So Helena came to what now is Israel and began doing her research.

In Bethlehem she built the Church of the Nativity over the location she determined was the place of Jesus’ birth. That is where we were today.

It took over an hour in line to have the privilege to kneel at a small altar and touch the place where Helena’s research said was the birth place of Jesus.

God came to earth arriving as a helpless infant. God chose to become one of us. Remember this is the same God who created the heavens and the earth. The God who created sub-atomic particles and the DNA helix and the human brain and the solar system and distant galaxies and black holes, etc. etc. This God beyond our small imaginations and limited minds decided to show up as a babe. Amazing!

As we exited from the Greek Orthodox managed site identified by Helena as where heaven came down to earth, we walked through the Armenian chapel into a lovely, relatively modern Roman Catholic church. We had to be quiet because we were barging into a Baptism already in progress.

A beautiful baby girl dressed in a stunning silk Baptismal gown became a child of God as the water washed over her “In the name of the Father, and of the Son (the One who showed up as a babe), and of the Holy Spirit.” What a wonderful reminder that our Lord who arrived as a babe keeps announcing His promises to children of all ages.

As we exited we witnessed something else that is rare here–rain came down upon us. In this dry, dry land, every drop is a blessing. And, that water washed and renewed and reminded us of the unfailing promises our Lord has made to you and me in Baptism.