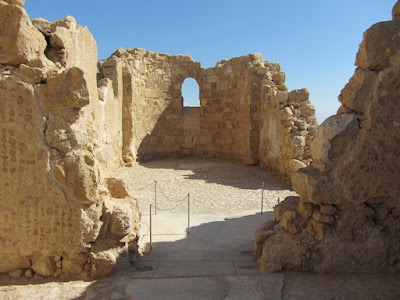 November 8-9, 2011
As Jesus came out of
the temple and was going away, his disciples came to point out to him the
buildings of the temple.  Then he
asked them, “You see all these, do you not?  Truly I tell you, not one stone will be left here upon
another; all will be thrown down.”
When Jesus was sitting on the Mount of Olives, the disciples came to him
privately, saying, “Tell us, when will this be, and what will be the sign of
your coming and the end of the age?”  –Matthew 24:1-3
The end?  A thread running through the desert
places we visited today (as we are nearing the end of our time in Israel) was the
end.
At Qumran we saw 2,000
year-old remnants of the Jewish sect usually called the Essenes.  These devout Jews grew so disgusted
with what was happening in the capitol (Jerusalem), especially in the Temple,
that they withdrew to the desert awaiting a final apocalyptic battle between
the forces of light and darkness.
(Of course, they were on the side of light.)  Before the Romans arrived to destroy their community, they
hid their precious writings in desert caves.  Those writings, discovered only about 60 years ago, are
called the Dead Sea Scrolls.  They
give us the oldest existing copies of the Hebrew Scriptures, our Old Testament.
At Masada we rode
a cable car that took us up over a thousand vertical feet to see remnants of
King Herod’s opulent palace/fortress perched atop an immense rocky
plateau.  Though built by Herod,
Masada is most remembered for being the location of the last stand of almost
1,000 Jewish zealots.  This was the
Jewish version of the Alamo.  It
took a long time, phenomenal effort, and ample resources, but an estimated
13,000 Roman soldiers finally breached the fortress walls and prevailed.  This finally ended the Jewish War,
which already had brought about the destruction of Jerusalem including the
Temple in 70AD.  This ending was
exactly what Jesus foretold 40 years earlier (see above).  To the very end, those Zealots prayed
for and set their hopes upon the Lord rescuing them.
In recent years I
often have been asked by people, “Do you think this is the end?”  Usually that question has come after the
most recent in a dreadful string of disasters.  Some have been distant earthquakes and tsunamis, but others
have been tornadoes and hurricanes and tragedies that have hit us where we
live.
So, is this the
end?  Only God knows.  More important for us as Christians are
Jesus’ promises that the end of this age will be good news for us.  Some have gone before us. All of us
will join them in the end that our Lord has prepared for His children.  God’s end, God’s final judgment on you
was announced in your Baptism.
That was when our Lord promised, “You
are mine.  That is forever.”  So now, as we are…
Waiting for the end:
We have been told that this good news is for us to share.  God even uses us to bring more into His
kingdom.  The risen from the dead Jesus
told his first disciples and tells us, “It
is not for you to know the times or periods that the Father has set by his own
authority.  But, you shall be my
witnesses, in Jerusalem, in all Judea, and Samaria, and to the ends of the
earth” (Acts 1:7-8).
While we wait:
Tomorrow our pilgrim band will celebrate the Lord’s Supper at the Garden
Tomb.  (The Garden Tomb is another
possible location for Calvary where Jesus died on the cross and the tomb where
his body temporarily rested.)  In
that simple meal we will again get the promise first announced to us in
Baptism, and the nourishment needed to keep walking and witnessing as disciples
of the risen Lord.
This is the end
of this blog for me, but I hope and expect this is a new beginning for many of
us pilgrims through life.  That is
what we all are.  We are chosen and
called to share the good news of our living Lord that has named and claimed us
so we might be his witnesses.
Shalom from Jerusalem.