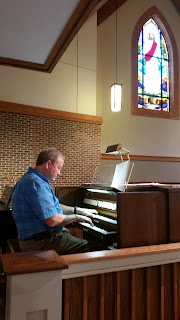 We’re pulling out all the Stops!

Yesterday organist Tom Alderman rehearsed for several hours on Messiah’s pipe organ in preparation for Sunday’s 6 PM organ concert.  Alderman’s recital will be the first concert of the 2015-2016 Music at Messiah Classical Concert Series and the first to feature Messiah’s recently installed pipe organ as a solo instrument.

Sunday’s concert will feature a variety of beautiful music well suited to both Messiah’s organ and the splendid acoustics of the sanctuary which was expanded in 2012.

The organ was custom built on site by George Miller and Miller Pipe Organ Services, Inc.  last summer and dedicated on Reformation Sunday, October 26th, 2014.   Mr. Miller is sponsoring this concert, arranging Mr. Alderman’s trek across and over the Georgia-Alabama line  this Sunday after his morning worship services conclude at Roswell United Methodist Church where he is organist.

All are welcome to attend the free concert.  Donations are gladly accepted and are used exclusively to support the Music at Messiah Classical Concert Series.   Along with donations at the door, patrons can support the series with individual sponsorships, which start at $25 and program advertisements, which also start at $25.

The 2015 -2016 season is the third season of Music at Messiah which began in the fall of 2013.  Sunday’s organ recital will be the 8th concert organized by the all volunteer Music at Messiah committee led by John Shriver.