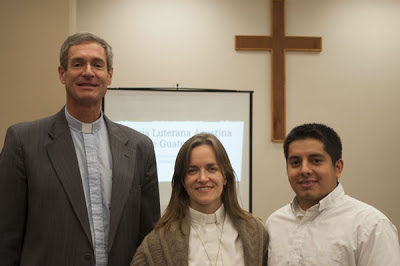 We were blessed last Sunday to be visited by our Missionary to ILAG Pastor Amanda Olson de Castillo and her husband Pastor Horacio Castillo.  ILAG is the Iglesia Luterana Agustina de Guatemala (Augustinian Lutheran Church of Guatemala) was founded in 1991 by Horacio’s father Bishop Horacio Castillo and his family.

Pastors Amanda and Horacio have visited us often and we consider them part of our family.  On this visit, Pastor Amanda preached the sermon at both worship services and she and Pastor Horacio led a forum between services to let us know of the progress of our brothers and sisters in Guatemala.

The first churches of the ILAG were formed in Guatemala City among the internally displaced, those who fled into the City during the war, who were (and still are) living in the ravines of the City.  The ILAG also operates two elementary schools which serve children and families in these marginalized areas of the City. 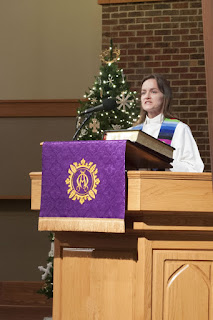 As refuges began to return from Mexico, they contacted Padre Horacio as they had known him from his visits to some of the camps.  Through these contacts the ILAG grew in the rural areas of the country among the resettled refuges.
The ILAG continues to grow each year by a few mission sites and churches as communities hear that the ILAG walks with people delivering the gospel freely to all people and visits the communities regularly.
The philosophy of the ILAG is to provide pastoral accompaniment and holistic development.  The center of the ILAG is Christ and from this center we seek to provide for all aspects of the life of our members and their communities – the spiritual, physical, emotional and material.
The church now has about 3,000 members in 19 congregations spread throughout Guatemala.  ILAG also operates one elementary school in Guatemala City.
They still have a lot of work ahead of them, so we ask that you keep them in your prayers as they do the Lord’s work.
If you would like to provide financial support to this ministry, you may do so by indicating “Pastor Amanda” on you offering envelop.