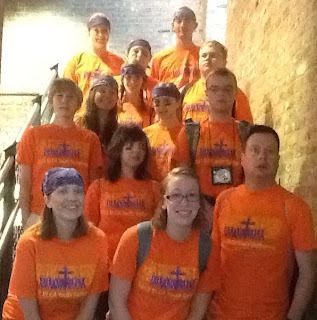 Friday started bright and early as the group was slated to meet at the dome at 7:45 AM for their service project.

I hadn’t slept hardly at all the night before, getting up for good at 4:45 AM and watching TV in the meeting room lounge so I volunteered to stay at the hotel with Claire while Diane got to go with the group. They ﻿worshipped at the dome in prepartion for service, a special feature of which was anointing their hands and feet. 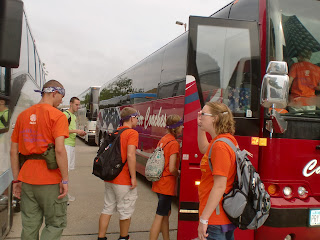 They then boarded a bus for Chalmette Battlefield. 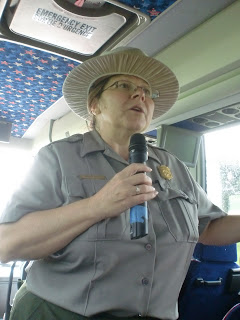 On the bus, Maggie demonstrated her encyclopedic of the history of the battle of 1812. While the group was held on the bus due to heavy storms and lightning, Maggie regaled the group with many tales after Justin asked the simple question “Why is there a British flag on the flagpole?” 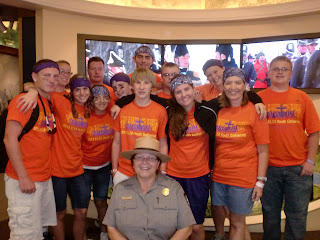 In the calm between two storms, they explored the visitor’s center. 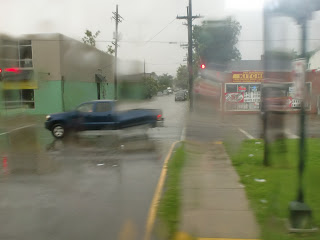 They experienced the floods of New Orleans firsthand as we saw people walking in knee deep water in the lower fourth ward, one of the areas most devastated by Hurricane Katrina. They saw first hand how quickly flooding could occur. It eventually became clear that they were not going to be cleaning any headstones in the cemetery so they got back on the bus to eat lunch and be taken back downtown. We thought they might get dropped off at the hotel due to the inclement weather, but the bus driver had a strict schedule to adhere to and all of a sudden were uncermoniously dropped off in an unfamiliar city on an unmarked corner in the pouring rain. That’s when I got the phone call from Randall asking me to “come get us now”. With Claire in tow, and my shoes in my hand, I immediately went down to the lobby to get the van from the valet attendants that became familiar with us with all of our comings and goings. When I picked them up, they were sleepy and disappointed that they were unable to complete a service project. After all, when I had asked them the first night what inspired them to come to the gathering, most of them mentioned the service aspect of it. So we met in our room had some reflection time and shared highlights of the previous day. 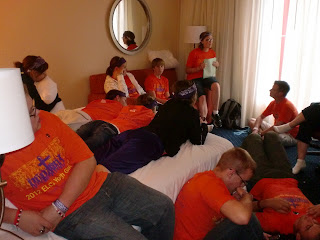 As the afternoon wore on and as there was no break in the weather (it rained 2.36″ that day) and high winds and storm warnings, we decided that there was no going out for dinner and ordered in. We also decided that I would drive them to the dome, pick them up afterwards and watch the video stream of the dome activities from the hotel. It had taken a long time for us to walk back the night before and the rain appeared to be a permanent fixture and I wanted to get the group to the Agape concert on time as there was no morning worship with Agape at this gathering. 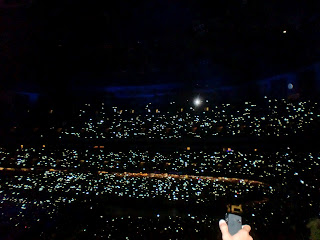 HIghlights of the dome activities that night included a rendition of “Jesus Loves Me” by the saxophone player that was hauntingly beautiful and “This Little Light of Mine” during which everyone in the entire dome let their light shine by raising up their cell phones. We also heard from the “Kids off the Block” program in Chicago and a Liberian peace activist who won the Nobel prize. I headed off in the van to the appointed corner which had looked fine when I had driven by it in the day. By night, it was a little frightening. As it turns out, the group exited the dome in a different spot than the night before and was swept up in the river of Lutherans that carried them in a different direction. 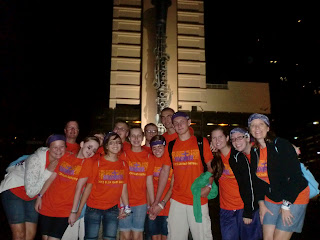 Thank God for cell phones! After a few moments of communicating, I found the group and whisked them to the Agape concert after wending my way though a new part of New Orleans that we had  not previously seen. Randall rode back with me to the hotel and walked with me to the concert to join the rest of the group. The halls of the Marriott were packed and we thought we might not get in, but I was determined to introduce Randall to the music of Agape. We jumped, we danced, we sang and fun was had by all. Just another great day at the gathering.