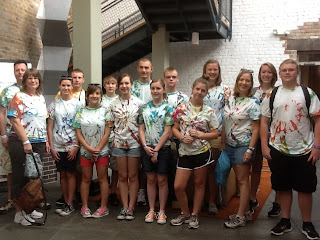 This is us at the Courtyard by Marriot getting ready to sally forth into the humidity of New Orleans.We took the trolley to Cafe Du Monde where, after some hovering and maneuvering, we all sat at tables close to each other and feasted on beignets. However, I first had to convince Morgan that all of the incredible number of bugs we saw weren’t going to attack her.

We had plenty of time to get to our next acitivity at the Convention Center so we walked along the shore, passing the aquarium, sighting a departing cruise ship and enjoying the view of the mighty Mississip. Our route included a detour through the Riverwalk Mall to take advantage of its air conditioning. You think once you’re inside the Convention Center that you’re there but it stretches out for a mile or so so we still had a ways to go and had to deal with a mass of Lutherans that were all waiting to go up two escalators for worship. 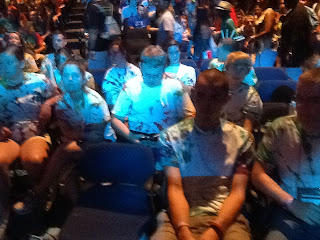 While we waited for worship to begin, we tried starting the wave as we in the first rows one one side of the space. After a few tries, we had the wave going from side to side and back. Our location was great for starting the wave but not so great for sound, but we enjoyed it anyway. After worship, we made our way though the UpZone, stopping to pray around the cross and then made our way to the Interaction Center. In the center, we split up into three groups, for the three adults. (Claire and Diane Davis went back to the hotel as Claire needed to rest.) The pictures here are just from my group. I’m trying to get pictures from others but we’re still sorting out the logistics of transferring everything. Ben and this clothespin mohawk was a hit. We saw Bishop Gordy driving the shuttle, yes, the space is so big they have airport type shuttles if you need a ride, and Rebecca Kolowe also driving. We’ll be spending time with both of them when we Practice Discipleship on Saturday. 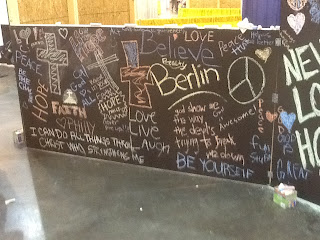 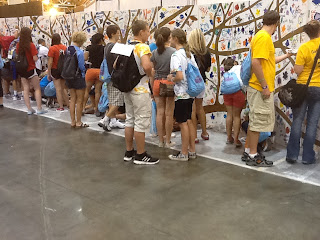 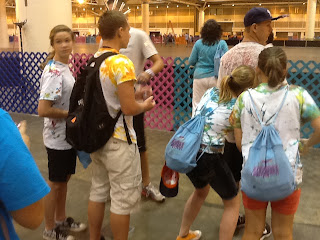 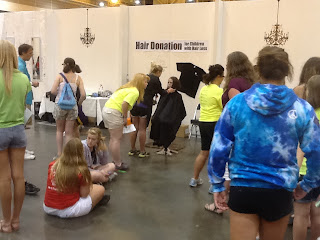 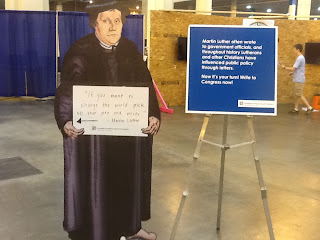 We were planning to meet at 1:00 and go to lunch at the mall but some of the girls wanted to participate in a flash mob. I have the video on You Tube but haven’t quite worked out getting it linked in to the blog. I’ll post it when I figure it out. Anyway, lunch followed but due to heavy rain (a theme of this gathering), we had lunch in the food court of the convention center and hung out there for a while. 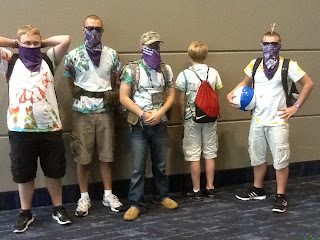 We did make it to the mall for a while and then headed off to dinner at Mulate’s “the original Cajun restaurant”. I bought fried alligator appetizers for everyone to try. Some, like Kyle, liked it so much they ordered it for dinner. Some, like Morgan and Heather Neely before her, were very skeptical. Great picture to come. After many faces, much trepidation and Randall’s comforting “it tastes just like ferret”, Morgan finally tried some. When she did, she went back for more because “that stuff’s good!”. We had a great dinner and a show as Ben was pulling pranks on Lauren and surrounding tables. (He tied napkins together and put them up his hoodie sleeve and had them pull it out.) It was time to head to the dome but surprise, surprise, it was raining. So, Randall went and got the 15 passenger van and drove the group to the dome and dropped them all off but me. I walked back to the dome with Randall and we arrived just in time for dome time. 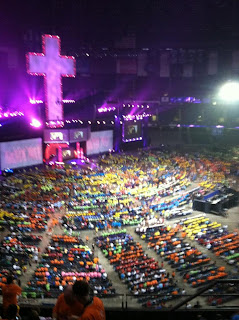 For an hour and a half we sang and listened to several inspirational speakers including a singer who plays the guitar even though he was born with one forearm, a woman who served as missionary in South Africa and an 18 year old woman whose family is serving as missionaries in Tanzania. The bishop concluded the evening with inspirational words. Memorable words included “In the west, they have watches, in Africa we have time”. The gift of being present with someone is one of the greatest gifts we can give and sometimes rare in our 27 seconds ago culture. We were also urged to remember that the greatest gift is to love and that means even people who are different from us racially, culturally, and physically. After the dome, the kids went to the Hilton Hotel for fun time: inflatables, karoake, sumo suit wrestling, velcro wall, etc. We concluded with final 15 devotion in a hotel room and agreed it had been a “great day”. This is most certainly true.﻿