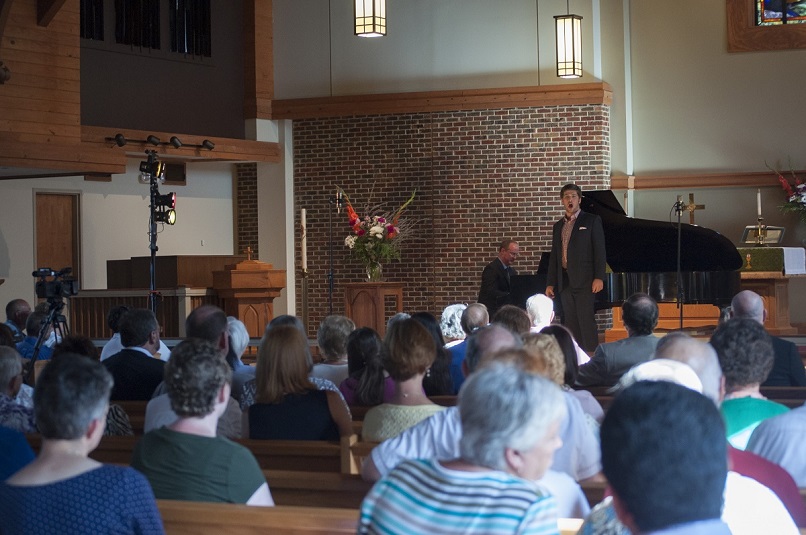 The Music at Messiah Classical Concert Series wrapped up its 2014-2015 concert schedule with record attendance on Sunday, August 2nd.  Over 170 guests filled the sanctuary to listen and enjoy baritone Andrew Nalley present a number of solo vocal, operatic and American folk classics.   Mr. Nalley was accompanied by Ron Guthrie.

[foogallery id=”1769″]
Mr. Nalley received his early vocal training with Martha Brouse at Belle Voce Studio in Huntsville. Ms. Brouse attended Sunday’s performance along with numerous friends and family members of the gifted University of Alabama senior. Also attending the performance was organist Dr. Frank Contreras, who was the guest recitalist for Messiah Lutheran’s original Organ Dedication in 1994.  Also spotted at the concert was City of Madison Mayor, Troy Trulock.

This particular concert had been in the works since the concert series started in the Fall of 2013.   It was Messiah church member Bob Gustafson’s exceptional, “talent radar,” that identified Mr. Nalley as an outstanding emerging talent to members of the Music at Messiah Series Board.  Securing a date with the busy and talented college student was no easy feat. On Sunday, after two standing ovations and several warm-hearted encores, it was apparent to all that Andrew Nalley was well worth the wait!

Looking forward, the next Music at Messiah Classical Concert Series performance is October 4th, 2015 at 6 PM. This will be an organ recital featuring Tom Alderman, Organist at Roswell United Methodist Church, Roswell, Georgia.  Credit for securing the musical gifts of Mr. Alderman for the Series go to George Miller, who, along with being Messiah Lutheran’s pipe organ builder, is helping to underwrite the concert.

Friends and followers of the Series are encouraged to renew their annual pledges soon for inclusion in the Oct 4th program.  Information about future performances and giving opportunities can be found on the Series’ blog at www.musicatmessiah.blogspot.com