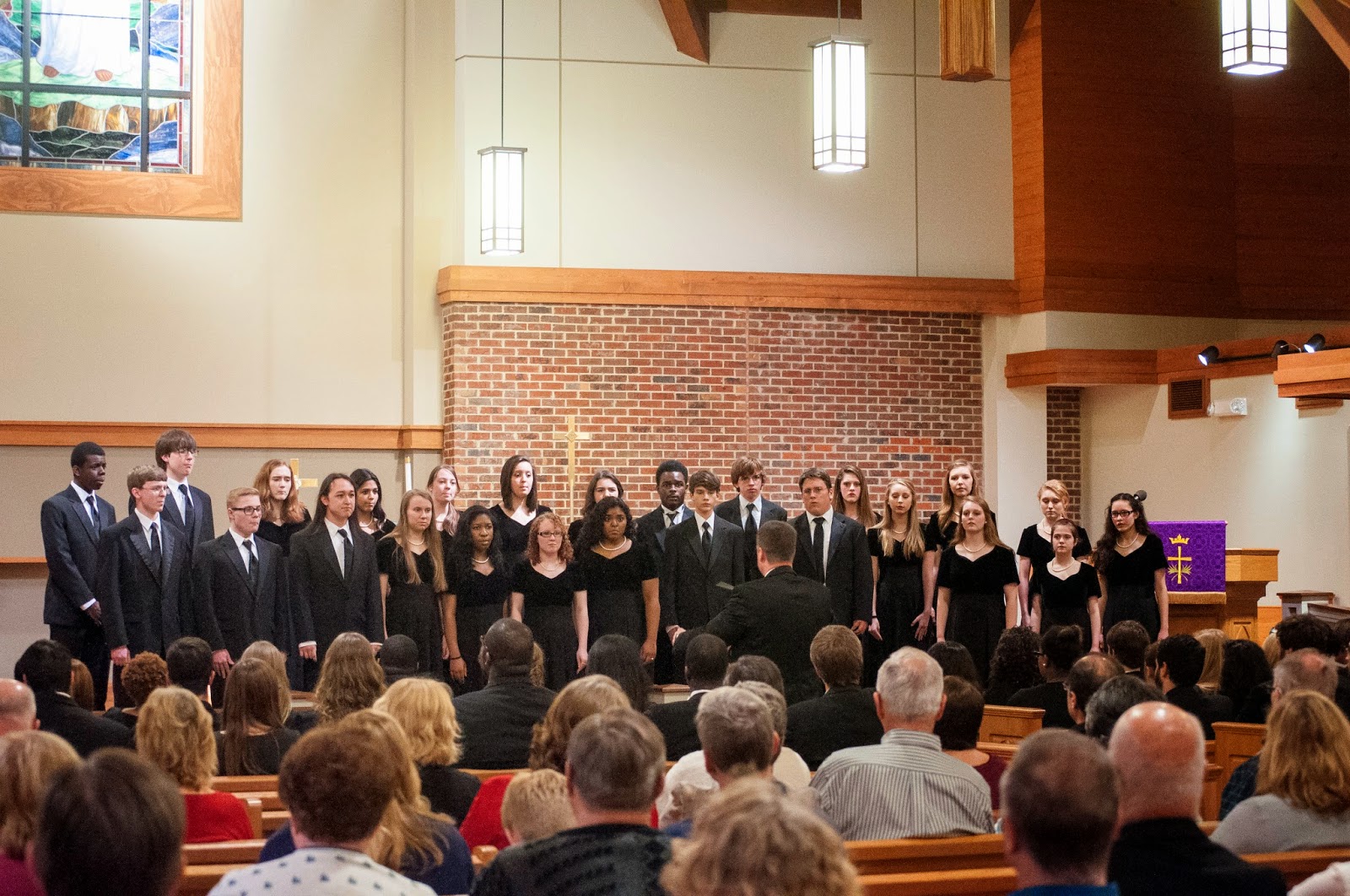 Upon completion of Of Crows and Clusters, concert attendees sprung to their feet with applause and ovation for the twenty-five City of Madison teens. Smiles blossomed throughout the three hundred seat sanctuary as the first choir took their seats, and the members of the University of Alabama – Birmingham’s Concert Choir moved up to nearly fill the front of the chancel platform.

Thursday’s concert of the internationally honored college singers was the seventh performance of the group’s three day, ten performance tour of Tennessee and Alabama, culminating in a concert at Nashville’s Cathedral of the Incarnation, on Friday March 13th.

Links to the concert pieces can be found at the bottom of this post!

“Sing unto God our strength: make a joyful noise unto the God of Jacob.
Take a psalm and take up the trimble, the pleasant harp with the psaltry.
Blow up the trumpet in the new moon, in the time appointed, on our solemn feast day.”

Throughout the concert, Dr. Kittredge provided comments and insights on the various works and the choir itself.  The choir, which is made up of both music and non-music majors, undergraduate and graduate, is an auditioned choir that meets weekly for hour and a half rehearsals.   According to the choir’s facebook page, they are both well traveled in addition to being well honored.
“The choir recently completed a  tour of Ireland where they participated in the Fleischman International Choral Competition in Cork, Ireland and brought home the “Heinrich Schutz Perpetual Trophy.” Previous international awards include two distinctions from the 34th annual Florlilege Vocal de Tours in Tours, France: the Prix Du Ministère de La Culture, an award given for best interpretation of a French choral work, and a top award in the Mixed Choirs Category.”
It was a powerful performance of choral music. The clarity and tone of the UAB choir was wonderfully matched for Messiah’s acoustical space.   The space is large enough to comfortably handle the volume of a large choral group, but not so large that the more delicate and quiet passages of the choir’s works were lost in the rafters.   The choir’s performance of Cantante Domino by contemporary composer Josu Elberdin,  provided an exeptional example of this – every word, every phrase so crisply delivered and received to each listener’s ears.

The grand finale of the evening saw the Patriot Singers join the UAB Concert Choir for Mortin Lauridsen’s O Magnum mysterium.  After its moving conclusion, the audience was once again on their feet, in eager hope of an encore, cheerfully provided by the UAB choir performing Stacy Gibb’s Ride on King Jesus.

Messiah offers an exceptional space for choral music through the Music at Messiah Classical Concert Series and Messiah’s Director of Music, Lois Graff.

The design of Messiah’s 2011 sanctuary expansion enlarged the chancel area (that part of a sanctuary where worship is led) and increased sanctuary seating by 50%. The sanctuary’s peaked ceiling and structural supports are surfaced in wood planks and beams, as are the two shallow transepts (one original, one new) along each side.

It became very apparent when work was completed that the acoustical qualities of the new space were exceptional for both choral and instrumental ensembles.  Just over a year after the sanctuary was dedicated Feb 19th, 2012,  the  Music at Messiah Classical Concert Series was formed.  Lois Graff, who is Messiah’s Director of Music and organist helped to spearhead the music outreach initiative with chairperson John Shriver and several church members.  An expanded sanctuary also meant an expanded church organ, and on October 26th, 2014 Messiah dedicated it’s newly installed pipe organ.

Now in its second season,  Music at Messiah’s next concert is scheduled for July 27th.  It will feature up-and-coming baritone, Andrew Nalley, who is a recent University of Alabama graduate quickly filling up his professional performance schedule.  More information will be posted on www.musicatmessiah.blogspot.com as the date approaches.

The UAB and Bob Jones HS Choir Concert was an opportunity brought to Messiah Lutheran Church by Randall Fields, who directs Messiah’s adult choir.  The success of Thursday’s concert, prompted many in attendance to ask, “This was terrific! When are we going to do this again?”

You tube links from the University of Birmingham’s March 12th Performance: