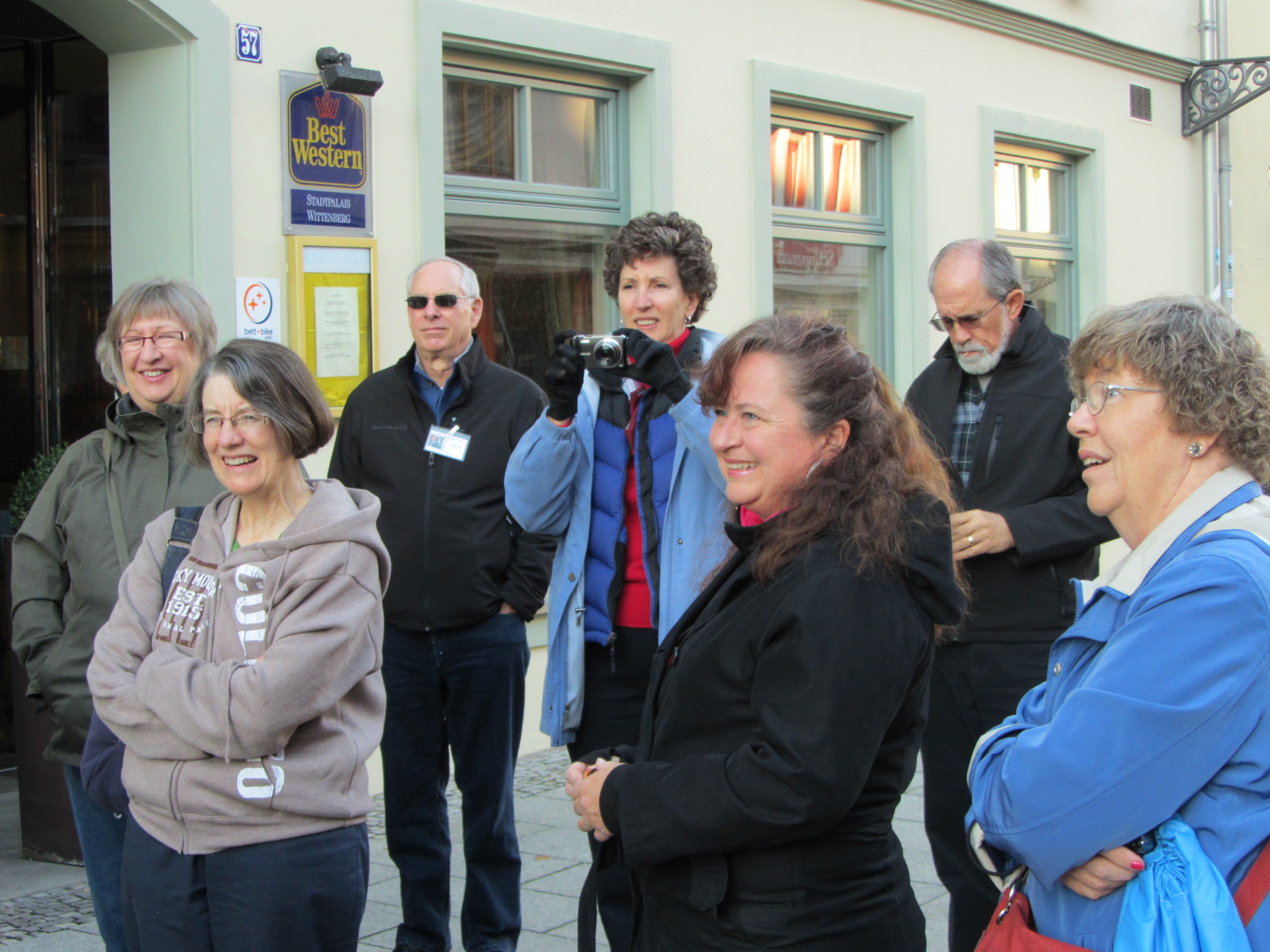 Hallo, from Germany, againMonday, October 14Yesterday morning we departed from Wittenberg after breakfast.  Our first stop was Torgau.  Torgau is a lovely little city today that is off the beaten track for most tourists.  We went to Torgau to see four sites: 1.) the tomb of Katerina von Bora (Luther’ wife), 2.) the only church designed by Martin Luther, 3.) the castle, and 4.) the place on the Elbe River where the U.S. army coming from the west, met their allies in the Soviet Red Army coming from the east in late April of 1945.1.) In 1552, Katie, the widowed wife of Martin Luther, and the Luther children fled from Wittenberg when the plague infested the city.  On the way to Katie’s hometown of Torgau she was thrown from the wagon she was riding in and suffered a severe hip injury.  Within a few days she had paralysis and shortly thereafter died.  Her tomb is in the wall of the City Church (St. Mary’s) in Torgau.  This was a church where her husband preached many times during the 40+ trips he made to Torgau in his life.2.) When Elector John Frederick decided to build a new church in the castle complex in Torgau, Luther was asked to design the worship space.  The construction was completed and the castle church dedicated by Luther in 1544.  What is striking about this chapel is its beautiful simplicity.  Most of the older churches in Germany that are Lutheran (Evangelishe) were previously Roman Catholic.  To me, some of those are beautiful and others are cluttered, but all are quite elaborate.  The worship space Luther designed has just two striking features: an elegantly plain altar and an elevated pulpit in the middle of the room.  The message in the design is clear: This is the place where we gather to hear God’s Word and receive the Lord’s Supper.  (Also, it was nice to visit a church that is virtually unchanged since it was constructed in the 1500’s.)3.) Though things usually were more exciting in Wittenberg in the first half of the 16th century, the favorite residence of Luther’s Princes was their castle in Torgau.  These Princes of Electoral Saxony were Frederick the Wise (1502-1525), succeeded by his brother John the Steadfast (1525-1532), and followed by his son John Frederick (1532-1547).  The castle (with mote occupied by brown bears) sits above the banks of the Elbe River right where….4.) News spread around the world on April 25, 1945, that the U.S. and Soviet armies had met on the edge of Torgau.  This signaled the completion of long, grueling marches from Omaha Beach for U.S. soldiers and from the gates of Leningrad for the Soviets. Monuments mark the place these two armies celebrated this victory on land.A THOUGHT: We are enjoying our journey through this beautiful country that is rich in history and occupied by hard working people.  Yet, I am saddened by a disregard for the Christian faith among the vast majority of the population.  I keep thinking about this and will probably write more about it in future blogs.  The words that come to mind for me were spoken by Jesus, “For what will it profit them if they gain the whole world but forfeit their life?” (Matthew 16:26)